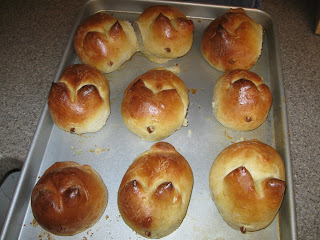 Wooden floors so run down as to easily mark her passage back and forth to the sink.  The rough silver trough was always placed out in the main part of the kitchen with the kitchen table to the side. I am sure it saw use soaking and washing clothes with the washboard, but it had it's own special use in the kitchen for her bread making. I can smell the scent of yeast and see the light skin on the pale rising dough.  As the hours passed I could watch this mound rise high in the tub. I suppose only a little girl could be delighted by the miracle of yeast, little crystals full of life, waiting to give rise to whatever baking job we give to it. This bread was a sight that I could walk around, bread bigger than me. To me it was magic.  Grandma would come by and pinch it and smell it, until some right combination was achieved. She had a special cotton blanket that would cover it, protecting it from draft.  I spent many hours there and can still see her leaned over the tub doing the kneading, her head wrapped with a kitchen towel.  The last thing she would do after knocking it down would be to mark the top with a cross.  The heel of her hand making a vertical, then horizontal dent in the bread.  This, perhaps, my first exposure to ritual. 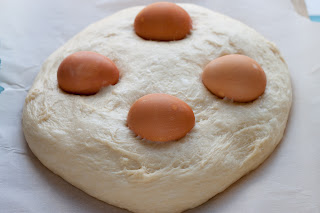 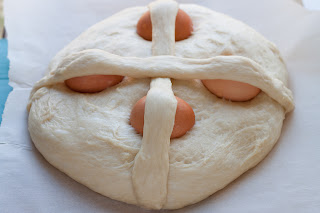 These days bread is so out of favor.  No gluten, wheat, carbs, sugar!  For me it was part of the weave of my life, the women that molded and shaped how I view the world, how I interact with it.  To be the child of farm woman, of immigrant grandparents, taught me many things, about generosty, abundance, magic and home.  So in this week of rebirth, rituals of religion, and spring, I enjoyed my journey into the rebirthing of my family's bread, which, by the way, did finally find it's own nature, as I continue to find mine.

Happy Spring to you all, and even if you don't eat much bread, you might enjoy the interesting quotes taken from the Village Voice. 1. "The sky is the daily bread of the eyes." --Ralph Waldo Emerson
2. "How can a nation be great if its bread tastes like Kleenex?"
--Julia Child
3. "Any time a person goes into a delicatessen and orders a pastrami on white bread, somewhere a Jew dies." --Milton Berle
4. "If you have two loaves of bread, sell one and buy a lily." -- Chinese proverb
5. "The smell of good bread baking, like the sound of lightly flowing water, is indescribable in its evocation of innocence and delight." --M.F.K. Fisher
6. "Two things only the people desire: bread, and the circus games."
--Juvenal

7. "Give me yesterday's Bread, this Day's Flesh, and last Year's Cyder."
--Benjamin Franklin
8. "I judge a restaurant by the bread and by the coffee." --Burt Lancaster
9. "Peace goes into the making of a poem as flour goes into the making of bread." --Pablo Neruda
10. "For less than the cost of a Big Mac, fries and a Coke, you can buy a loaf of fresh bread and some good cheese or roast beef, which you will enjoy much more." --Steve Albini
11. "There are people in the world so hungry, that God cannot appear to them except in the form of bread." --Mahatma Gandhi

12. "I like reality. It tastes like bread." --Jean Anouilh
13. "Deliberation, n.: The act of examining one's bread to determine which side it is buttered on." --Ambrose Bierce
14. "Blues is to jazz what yeast is to bread. Without it, it's flat." --Carmen McRae
15. "Art is our chief means of breaking bread with the dead." --W.H. Auden
16. "If I survive, I will spend my whole life at the oven door seeing that no one is denied bread and, so as to give a lesson of charity, especially those who did not bring flour." --Jose Marti
17. "I am proud to be an American. Because an American can eat anything on the face of this earth as long as he has two pieces of bread." --Bill Cosby
18. "'A loaf of bread,' the Walrus said, 'is what we chiefly need: Pepper and vinegar besides are very good indeed.'" --Lewis Carroll 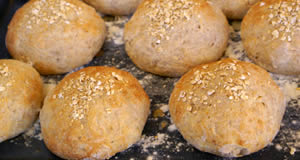 19. "Men can starve from a lack of self-realization as much as they can from a lack of bread." --Richard Wright
20. "A loaf of bread, a jug of wine, and thou." --Omar Khayyam