TOES IN THE SKY, SAHARA SMILES

I was sitting in one of my favorite spots overlooking the Rock in Morro Bay.  The mist was sliding around the base of the rock, sometimes occluding the top, and within minutes the lower portion.  For a moment I couldn't see it at all, and then, BLINK, there it was in full. 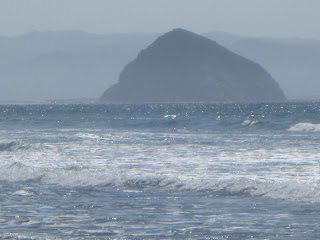 So often we only see such a small portion of what is happening, or what surrounds us, or the story.
We cannot think that the current difficulty is indeed tied to the joy waiting around the next bend.  Or see that the trouble here is a gift to give us an opportunity to miss and even bigger mess ahead.

All is connected.  We are connected.  Have the consciousness, just for today, that what we toss into the waters of the Pacific Ocean is felt by someone standing on the sand in the Sahara.

REPEAT:  I am not alone, have never been alone, and cannot, in the future ever be alone,  I belong in my life, and who I am today touches everyone, as they do me.

If this interests you, explore COURSE IN MIRACLES - A Course in Miracles - famous quotes and sayings
Posted by B. Misty at 4:48 PM No comments:

When you do anything repetitive, it allows the mind to go into a kind of idle gear.  I think it is why I love those kinds of activities.  Not racing but settling into to something.  Anyway, when I was doing my mile in the pool yesterday morning, I started to think about water and how it surrounded and held me in place and time.  That lead me to think about that study about how water is effected by the surrounding emotions when it freezes.  LOVE water made different crystals than HATE water.


Although there are critics of this idea and this study, it led me to think about surrounding energies.  The first comes out of Siddha Yoga teachings, that tell us that our minds are deeply connected to those energies of the people around us.  In fact if we feel ourselves low or troubled, that we should first look to which people we have spent time with.  Is there energy uplifting and positive or critical, angry or sour?

The next thought was from Buddhist traditions and I was thinking about the living meditation of saying "I love you" within your mind whenever you are in the presence of someone who is fearful, escalating in anger or threatening in some way.  I have used this at times in sessions when I see a client sliding into a despairing state, or acting defensively out of fear.  I was often able to see immediate changes in the person, when nothing else had apparently influenced their state.

Carl Jung also believed that if you want someone to know what you are thinking, you only have to KNOW IT DEEPLY yourself.  I have often seen this evidenced when a client works for a period of time towards the end result of confronting a person or situation.  What is surprising is that often when that state of readiness exists, they will often report that the situation or person has changed or shifted behavior.


As far as we can discern, the sole purpose of human existence is to kindle a light in the darkness of mere being.

It is the same with the physical world as well.  If we are in places where there is stress, disorder and ugliness, we inhale this somehow into our being, for me a kind of disgruntled energy arises within.  And when we are in orderly places or natural environments, we are calmed.  I especially like orchards and vineyards, or well tended gardens, but the wildness of the forest or the ocean is calming and steadying as well.

So what are we talking about here?  Our environment does touch our Psyche and Soul.  You might consider a day of watching where you are and how the space, people and world interact with your own energies.